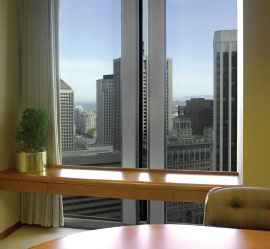 Spanning five blocks in the heart of San Francisco’s prime commercial district, Embarcadero Center is one of the largest mixed-use complexes in the western United States. Offering four million square feet of office and retail space, the center encompasses five office towers, with three interconnected shopping levels in four of the towers.

While Embarcadero Center’s five office towers gave tenants breathtaking panoramas of the city, tenants on the south, east and west sides of the buildings often needed to close heavy draperies over their vast windows to block the intense heat gain and glare when the sun was beating down during the day.

“Many of our tenants chose the Embarcadero Center office towers because of the view space,” says Danny Murtagh, director of engineering for Boston Properties, which owns and manages the Embarcadero Center complex. “So naturally, they were not entirely satisfied when they had to cover their windows to stay comfortable on bright, sunny days.”

In addition, maintaining a comfortable temperature through- out the five buildings during California’s sunny days was an ongoing—and expensive—challenge.

After several years of investigating various options and potential solutions to reduce heat gain and reflectivity, improve tenant comfort and cut down on energy use, Embarcadero Center property managers eventually zeroed in on window film.

“We watched window film technology evolve over the years, to the point where we felt we were ready to bring it to our five Embarcadero office towers,” Murtagh says. “Our original goals for a window film installation centered on tenant comfort and energy savings. But, during our investigation, we realized there was another substantial benefit we hadn’t initially considered— a significant reduction in ultraviolet rays. This had the potential to also improve the health and safety of our tenants and reduce wear and tear on their furnishings. We quickly realized that installing window film would be a win-win for everyone.”

According to David Lundquist, president of Climate Insu- lating Products, the 3M Night Vision window film was the perfect choice for Embarcadero Center.

“We used 3M Night Vision 25 on the building’s south, east and west sides, because of the film’s superior ability to reduce solar heat and decrease glare,” says Lundquist. “We knew that alone would greatly improve tenant comfort. But with Night Vision’s low reflectivity, we also knew that tenants would finally have the ability to enjoy clear views both day and night.”

Often, films that reduce solar heat and glare are so reflective they are difficult to see through, especially at night. 3M Night Vision film blocks solar heat by up to 59 percent and UV rays by up to 99 percent, and it reduces glare by up to 72 percent— all while preserving views. The same technology that tones down reflectivity also makes Night Vision film color-stable, ensuring that the color won’t change over time.

As soon as the window film installation project was under way, tenants began reporting improvements, says Murtagh: “In fact, we even got a couple of calls asking us to turn down the air-conditioning, because now, on that warm southern face of the building, some of the tenants were cold!”

Those energy savings are also translating into cost reduc- tions, with an estimated $350,000 savings per year. In addition, Embarcadero Center received a substantial rebate for the win- dow film installation from Pacific Gas and Electric. The energy savings made possible by 3M window films usually pay back the cost of the film and installation within three to five years; but in the case of Embarcadero Center, 3M estimates payback could be even sooner.

“3M is a worldwide brand,” says Murtagh. “3M products are used throughout our industry—tapes, sealants, coatings, epoxy products, you name it. As a result, we felt comfortable putting our trust into 3M’s window film. As it turns out, the film installation accomplished all of our goals and more.”

Installation Time: Eight months, with most of the work completed at night

Type of Film: 3M Night Vision 25 on the south, east and west sides of the buildings

Project Notes: According to Brett Terry, a project manager at Climate Insulating Products, the com- pany had to work around established tenants and extensive built-in furnishings, so most of the instal- lation work was done at night.